Our Man of the Year Nicholas Cage 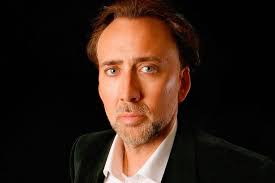 First before all the PC crowd has a baby, Nicholas Cage is a man.  If we were to give this award to say to HerHillaryness, it would be Woman of the Year.  And, if we, were to give it to this award to Greta Thunberg, like that almost out of print and existence entity, Time Magazine, it would be Girl of the Year.  And, if Nicholas Cage writes in and says he wants to be Person of the Year, so be it.

Now you may ask just what did Nicholas Cage do in 2019 and the answer is nothing much.  Certainly nothing much in terms of Hollyweird and being in any kind of a movie that anyone saw.  I mean he went from an Academy Award winning actor to a guy in a bunch of strange movies that went straight to live streaming and nobody watched them.  And, if you stop to think about it most people have done nothing that anyone has paid much attention to either.  I mean most people have done things for family, friends and colleagues but nothing that the Mass Hysteria or The Cognoscenti of The Known World paid any attention to, just like Nicholas Cage.  So, in his new found ignominy Nicholas Cage has become just like us.  Striving, yearning for a bright new day and looking back on his life with a sense of wonder that asks, was it really so?  Was that me?  Did I do that, really do that?  Wow!

Runner Ups for this year’s award were; El Chapo Drug Kingpin Emeritus doing life plus 30 years, Prince Andrew BFF of the late Jeffrey Epstein, J-Lo, Summer Walker who is a new and up and coming singer and Kyle ‘Home Run’ Higashioka of the New York Yankees.

Posted by Don Frankel at 2:00 AM No comments:

We’ve come to this startling conclusion about the Never Trumpers in the Democrat Party, The Republican Party, The Conservative Party, The Green Party and any other party, also the Never Trumpers among the Talking Heads and the Cognoscenti of the Known World; they either never played baseball or they weren’t very good at it.

As we mentioned The Bench Jockey’s modus operandi, is to get the other player off their game.  If the opposing player is a good hitter and they go up to home plate after being reminded of their failings, they may get angry, yell back and then they might strike out instead of getting a hit.  The Bench Jockey can get real results.

So when the Donald Himself needles the Never Trumpers and they become unglued we safely assume that, they never played baseball or if they did, they weren’t very good.  Because The Bench Jockey seems to be a guy, they never heard from before.

Posted by Don Frankel at 4:40 AM No comments: